RSS
← How to be Resilient, How to Recover from the Adversity? Step 2. Perspective.
My Book “UNSTOPPABLE. It’s a Choice” published →

How to be Resilient, How to Recover from the Adversity? Step 3. Your Focus.

Focus on what you have and what you can do. Focus on the solution, not the problem.

After the affliction or generally during hardships, it is crucial to be aware of your thought patterns, what you are focused on. Naturally, we grieve and are longing for that which was lost. And yes, we do need that time to grieve. It is important though not to stay there longer than we need. At some point, it’s imperative for the focus to be shifted away from the tragedy to the newness, from the problem to the solution, from the limitations to abilities and opportunities. What you focus on will have a significant impact on your journey to recovery.

While we’re going through a hardship, normally we don’t think about what’s far ahead because we are focused on what’s going on at the moment, how we feel at that time. Would you agree that naturally, we think about the problem, often focused on analyzing how difficult it is rather on our ultimate destination?

But it is imperative to keep our ultimate destination in mind, not the problem. How many times have you heard sayings like, “I got bombarded by so many problems that I didn’t have the energy to continue,” or, “The challenges I encountered were too much to bear,” or, “I got so tired that I just couldn’t do this anymore.” And you find out that they gave up on something they were just recently passionate about. There might be different reasons why they gave up on their pursuit, but overall it all comes to the same point: their difficulty overpowered them. For the most part – because they put so much attention to how difficult it was – more attention was paid to the challenge than on the ultimate goal. When we face any difficult situation, what will determine what’s next is:

I believe putting your focus on the wrong aspect of the situation is one of the fastest roads toward failure. It’s very easy to give up when you focus on the obstacle or difficulty you are facing. Why? I am sure you have noticed in your life – the more you think about the bad situation and how difficult and painful it is, the worse it seems. Negative thoughts become more and more dominant and darker, and your problem snowballs into something bigger and more challenging. It reaches the point to where it seems irresolvable and you might say to yourself, “I can’t do this.” And here you are, you have arrived at a different destination that you first intended to.

I want to share an excerpt from my upcoming book “Unstoppable. It’s a Choice”, one of those special moments that set a direction of my journey of recovery.

“I don’t remember exactly when this happened, but it was soon after this marveling revelation. One day my mom and I were walking outside enjoying the beautiful spring day and we saw a young guy in an electric wheelchair, sitting alone, enjoying the weather as we were. We walked up to him to chat. He was approximately my age and he was completely paralyzed up to his neck. He was not able to use his legs or his arms and he had a hard time speaking. Like mine, his life had changed in a heartbeat when he got beaten up by a gang, resulting in total and permanent paralysis. This young and handsome guy was sitting in a wheelchair with no ability to move his body, even having difficulty speaking. Were that not enough, his family had abandoned him, forcing him to stay at various Rehab Centers and nursing homes, all the while being taken care of by strangers. As he was sharing his story, a thought came to my mind “See? You could’ve been in his place. That is what Rose was talking about.”

That moment it seemed as though the entire world has stopped. Suddenly, the astonishment of my new revelation of how well it ended for me overshadowed the horror of my loss. “I am so blessed! In addition to the miracle of not breaking my neck, though I had a strong head injury, I can think clearly, I can express myself easily, and I can move!”

I wanted to shout out with happiness. It seemed like my eyes were opened and I saw with clarity how fortunate I was. While talking with the young man, my mind was captured by the astonishing facts of my blessings. All I felt was gratitude. After we ended our conversation, my mom and I continued walking toward the lake. I was completely astounded with what I had just realized.

“Wait a minute,” I thought. “I have a clear mind and I can communicate. And while I do not remember many things due to the brain injury, I can think and express myself the way I did prior to the accident. I still have my right arm functioning. What if I still can be independent? I could learn how to do things with one arm, and then I could take care of myself independently. I can move my body freely, so I will walk again wearing prosthetic legs. I won’t really have to depend on others. My body is not the same anymore, but I am still able to use what I have left. I will do everything in a way that I can. The important part is that I can! I am blessed that it ended the way it did. I will come back to life.”

I was so consumed by my sudden realization that I didn’t hear what mom was saying. And as I was having this inner dialogue, I felt how everything was changing within the core of my being, specifically in what I noticed and how I perceived my situation. Instead of looking at my losses and limitations, I saw how much I actually was able to do.

Instead of despair, I felt enlightenment. It felt as though with every breath, I was gaining the hope that I would have a way out of this hopeless place in my life. As I was being rolled in the wheelchair through the forest, in my mind I was building a strategic plan to end this rolling in the wheelchair business to bring myself back to life. “

The time in a Rehab Center was the most painful and difficult time I can remember. But, it was a pivotal time.  The realization that I have so much to be thankful and how much I was able to do, transformed the way I saw my new life and the way I felt about it. I understood that my life experience will greatly depend on what I focus on. Since then, I began changing my thinking.

Instead of thinking that I no longer was able to do something because I did not have my legs and could not use my left arm, I looked from a different angle – I can think clearly, I can move my body and I still can use my right arm – there must be a way for me to be self-sufficient, how can I use what I have to achieve what I desire? I focused on the opportunities and possibilities rather than what was destroyed in my life and how many doors were shut because of my physical limitations. Instead of dwelling on how I no longer could go out of my home and do the work that I used to be able to, I looked from a different angle – what are the possibilities for me to go out of my home, how could I manage things independently, and what kind of work I could do in my situation? And then, while focusing on my abilities and opportunities, I was seeking for the solution to build my future rather than dwelling on the problem and grieving about what’s no longer there.

Imagine a race with hurdles. When an athlete runs close to the hurdle (obstacle), he jumps over it and continues to run. When he gets close to the next hurdle – he overcomes this as well and races until he reaches the finish line. The interesting thing is that while the runner sees every hurdle ahead, his eyes are not on the next hurdle, but where the finish line is. His focus is the destination, not obstacles on the way. I know this because I used to be an athletic runner when I was a teenager. We were taught not to focus on the hurdle, but always to focus ahead where the race was ending. Why? Focusing on the hurdle most of the time resulted in the failure to overcome it, and the chances of winning were reduced. The major focus was the final destination; hurdles were just obstacles along the way which we needed to overcome and continue on running no matter what until we reached the finish line.

That’s the mindset I had when aiming for my goal. My eyes were set on my ultimate goal where I was going, and difficulties were something I needed to overcome so I could continue my race until I reach my final destination. Obstacles are there to be overcome, and not something that could stop me.

Now I see that I unconsciously had the same thought pattern every time:

It’s one of the most important key points in self-management that played a major role in my ability to break through the obstacles or handle hardships when it felt unbearable.

Now, after a while, I can see that such mindset, by concentrating not on the problem but on its solution, strongly and consistently moved me forward. Managing my focus empowered me to aim and achieve goals that others said were unattainable for me. And then, this skill empowered me to move across the globe from my family and establish my life in the United States even though at the time of my decision I had no place to live, no work, not a lot of money, and even no right to live and work in America.

If I had looked at those challenging situations as if they were insolvable problems and focused on how difficult it was, I know I would have been stuck and it would have taken much longer to achieve my goals. In fact, most likely I would not have reached them at all. If I had focused on my limitations, what I have lost and what I could not do anymore, my life would be miserable. In comparison, focusing on my abilities and opportunities and solutions empowered me to attain life’s transformation.

When facing a difficult situation, instead of being worried or stressed out about the problem, begin immediately to focus on the solution. And then, make every effort to solve the problem the best way you can.

In my next message, I will share how to focus on the solution and how to find it.

Meanwhile, be Unstoppable. It’s a Choice. 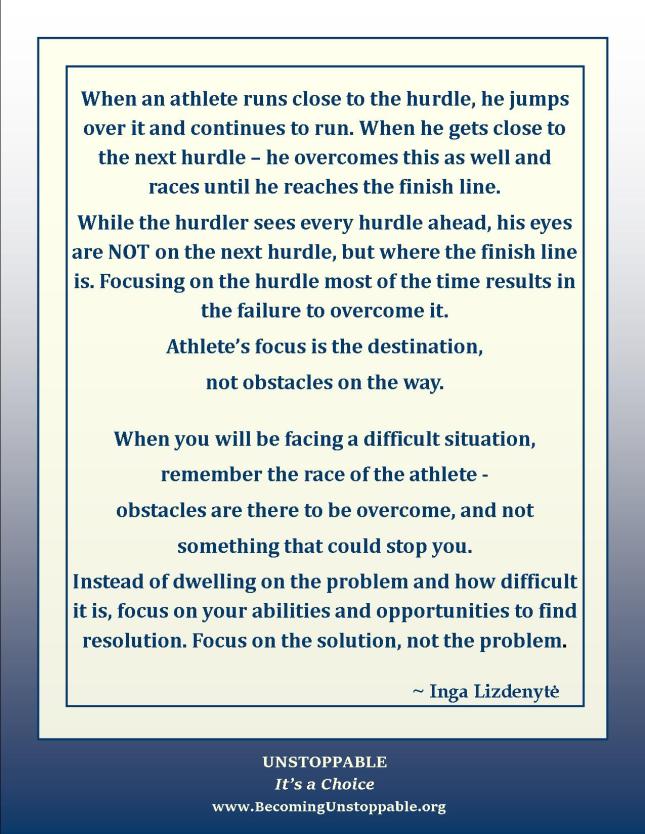 ← How to be Resilient, How to Recover from the Adversity? Step 2. Perspective.
My Book “UNSTOPPABLE. It’s a Choice” published →